Help provide timeless wisdom to a troubled world. Make a gift to TGC on Giving Tuesday.

At the end of 2022, the world watched the brutal government crackdown on protestors speaking out against China’s stringent “Zero-COVID” policy. These events confirm much of what we in the West assume about Xi Jinping’s authoritarian regime, its repression of dissent, and its intolerance of minority groups.

That intolerance is directed at unregistered churches in China, those outside the direct control of the Communist Party. Writing from his experience as a leader among such churches, Wang Yi’s Faithful Disobedience: Writings on Church and State from a Chinese House Church Movement reveals the discrimination facing those outside the state-approved churches in China. But if we stop there, we miss the point of this important book.

Hannah Nation, managing director of the Center for House Church Theology and the book’s editor, encourages readers to engage the Chinese church by “looking beyond the commonplace ‘persecuted Christian’ narratives that are so prevalent, and that limit our ability to actually hear from churches outside the West” (9). If we think of Wang Yi’s experiences as altogether different from ours, we may not recognize the perspective they offer us today. 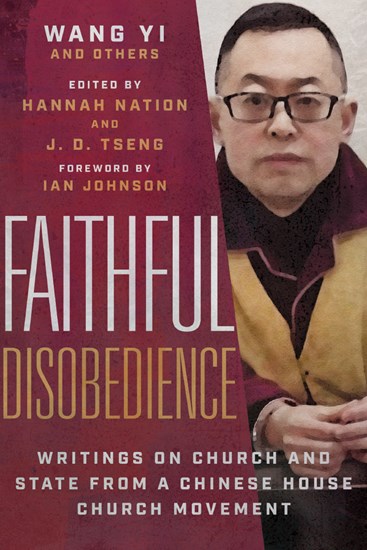 Faithful Disobedience: Writings on Church and State from a Chinese House Church Movement

Faithful Disobedience: Writings on Church and State from a Chinese House Church Movement

Throughout China’s rapidly growing cities, a new wave of unregistered house churches is growing. They are developing rich theological perspectives that are both uniquely Chinese and rooted in the historical doctrines of the faith. To understand how they have endured despite government pressure and cultural marginalization, we must understand both their history and their theology.

In this volume, key writings from the house church have been compiled, translated, and made accessible to English speakers. These writings are an important body of theology historically and spiritually. Though defined by a specific set of circumstances, they have universal applications in a world where the relationship between church and state is more complicated than ever.

Faithful Disobedience brings together writings and speeches of Wang Yi, founder of Chengdu’s Early Rain Reformed Church (later renamed Early Rain Covenant Church), along with other leaders in the urban house church movement that emerged in China at the beginning of this century.

A well-known legal scholar and public intellectual, Wang was baptized in the mid-2000s. His rise to global notoriety came through a 2006 visit to the Bush White House and later as Wang and his church were profiled by journalist Ian Johnson in The Souls of China. As pressure on the church increased, Wang and Early Rain appeared frequently in the international media, which covered extensively his arrest in December 2018 and subsequent nine-year prison sentence for subversion of state power and illegal business practices.

The book opens with the “House Church Manifesto,” compiled by Wang Yi in 2010, which surveys the unique character and role of the urban house church movement—technically illegal but thriving since the early 2000s.

In part 2, “The Eschatological Church and the City,” Wang develops his ecclesiology of “the city set up by God” with a mission to “usher it into every city until the ends of the earth” (148). Persecution is evil because it hinders the fulfillment of the Great Commission.

Persecution is evil because it hinders the fulfillment of the Great Commission.

Part 3, “Arrest and the Way of the Cross,” chronicles Wang’s response to the 2018 religious regulations and contains “My Declaration of Faithful Disobedience,” the letter he wrote to his congregation in anticipation of his arrest, from which the book takes its title.

At the heart of the fraught relationship between China’s unregistered church and the state lies the question of why Wang Yi and others refuse to seek legal status under the government-sanctioned Three-Self Patriotic Movement (TSPM).

Echoing the argument of Wang Mingdao, an indigenous church leader imprisoned in the 1950s for his refusal to cooperate with the TSPM, Wang stresses the question is ultimately not political but spiritual: Who is the head of the church—Christ or the state? Here Wang is joined by Jin Mingri, a Beijing pastor who served for 10 years in a TSPM church before starting his own independent congregation, and by leaders of Shouwang, another Beijing congregation that tried unsuccessfully for years to gain legal registration apart from the TSPM.

Testifying to Another World

While Wang’s pushback against state overreach may strike a familiar chord with Christians in the West who are concerned about their own governments’ illegitimate restrictions on religious expression, Wang’s eschatology suggests a fundamentally different approach to the role of the church in society.

Heavily influenced by the Reformed tradition of political and cultural engagement, Wang actively supports the church’s forays into publishing, Christian education, social service, advocacy, and other forms of outreach that have been hallmarks of the urban house church movement over the past two decades. But these, according to Wang, aren’t ends in themselves. He likens the church in society to master ballet dancers performing atop a landfill, which accentuates the beauty of their performance and thus becomes an image of the new heaven and the new earth.

Similarly, should the church need to disobey the government as a matter of conscience, “the goal of [civil] disobedience is not to change the world, but to testify about another world” (223). In contrast to an individualistic Western rights-based understanding of religious freedom, Wang argues that, while the church will not neglect to use political and legal means to defend itself, the end goal isn’t freedom but the communal proclamation of Christ. The church’s response to persecution “is an apologetic and missional act, not a human rights movement” (203).

The goal of [civil] disobedience is not to change the world, but to testify about another world.

Should this testimony involve suffering or even martyrdom, then believers should welcome these, for “the true mark that shows we truly belong to the kingdom of Christ is not our success, our wealth, or our reputation, but the mark of the cross of Jesus on our bodies” (189).

With his legal background, political activism, and global persona, Wang Yi can hardly be considered a typical house church leader. To understand Wang Yi, we must acknowledge his concurrent role in the time-honored tradition, dating back to Confucius, of Chinese intellectuals as the “conscience of the nation,” remonstrating with the state and paying a tragic price for their efforts.

Neither can Wang’s experience be seen as representative of the entire house church movement. Some Chinese believers view his tactics, including public observances of politically sensitive anniversaries, mobilizing church members to pray in front of police stations, and organizing a national signature campaign, as unnecessarily confrontational and not helpful to the church. Their voices need to be heard as well, as do the voices of Christians who have chosen to remain within the TSPM, believing it’s possible to serve there faithfully even under tight government supervision.

The rich analysis of China’s house church and its theology contained in this collection offers precious insights into one of history’s most remarkable Christian movements. Wang’s reminder that the cross is the center of Christian identity, his faithful testimony to another world, and his conclusion that “the greatest benefit of the church-state conflict is our union with a Christ who himself was judged” (177) provide the Western church with a much-needed perspective on our witness in the face of opposition.

Brent Fulton is the founder of ChinaSource, an international organization serving the global church as a resource on China and a catalyst for collaborative ministry. He’s the author of China’s Urban Christians: A Light that Cannot be Hidden (Pickwick, 2015).

Get Our Latest Book Reviews Delivered

2 How to Handle a Difficult Small-Group Member

3 Opposing Gay Marriage May Seem like a Lost Cause. History Suggests It Isn’t.

4 Chinese Pastors Can Teach You What John Calvin Can’t

5 Wednesday Addams and the Return of Black-and-White Morality

Reflections on C. S. Lewis’s most mysterious relationship and the mysterious providence of God.

The Modesty Conversation We Need to Have

4 Ways to Approach the New Year with Jesus

My Favorite Bible in a Year Reading Plan

How to Be the Leader Your Church Really Needs

Keller’s Formation: Behind the Book

Faith & Work: How Do I Glorify God Even When My Work Seems Meaningless?

A Biblical Theology of Race and Justice: Live at TGC21

Getting Rid of Your Fear of the Book of Revelation

Looking for Love in All the Wrong Places: A Sermon from Julius Kim